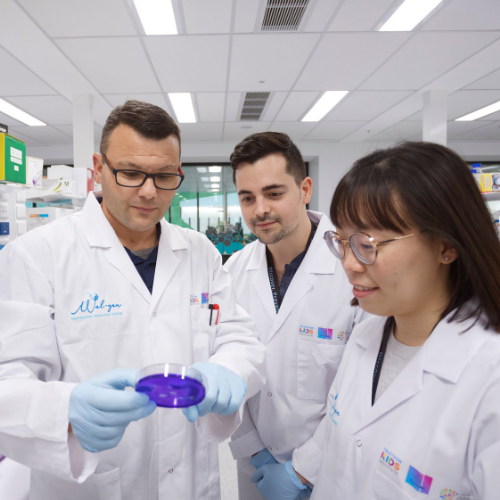 The discovery of antibiotics is one of the greatest medical advances of the 20th century, where they have been used to successfully treat many previously untreatable bacterial infections. However, their success has been accompanied by the emergence of antibiotic resistance (also known as antimicrobial resistance; AMR). This is where bacteria have evolved to “resist” the mechanisms by which antibiotics have their effect.

As such, the World Health Organisation has named AMR as one of the top current global public health threats, estimated to account for over 10 million deaths in under 30 years if nothing is done. With little investment into finding new antibiotics, alternative treatments are being explored including phage therapy.

What are Phages and Phage Therapy?

Phages are viruses that only infect and kill specific bacteria and can be found everywhere in the environment. They have been used overseas on a compassionate use basis with great success and have been shown to have no side effects.

Researchers at the Wal-yan Respiratory Research Centre at Telethon Kids Institute have worked closely with clinicians to create a large collection of AMR bacteria causing infections in WA and have found phages specific to these. These researchers have joined forces with others in Australia to form The Australian Phage Network, by leading the WA arm with the goal to treat the first patient with phage therapy within 12 months.

Please join us for a virtual information evening to learn more about progress towards phage therapy in WA. We look forward to providing you with information about phages and answering any questions or concerns that you may have.

RSVP: Angela.Fuery@telethonkids.org.au by Friday 26th November – (a meeting link will be sent to you following your RSVP). 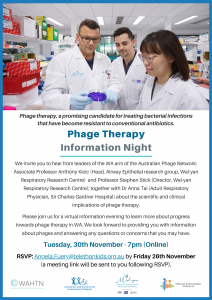